UC Berkeley engineering students created the latest in a distinguished line of solar powered cars.  Dasolar.com is proud to be a sponsor of the 2009 CalSol team, and we wish them great success at the upcoming 2009 Formula Sun Grand Prix held at the Motorsport Ranch in Cresson, Texas.

GoldRush, Berkeley's newest solar car, has been a number of years in the making.  It is designed around a three wheeled frame to reduce the weight of the car.  The driver sits upright (at a 27 degree angle) as required by regulations, so design of the drivers compartment was critical to reducing drag. The car's shell is comprised of molded Kevlar and Nomex honeycomb, combined with a chassis of chromoly steel and is covered with photovoltaic cells combined into one giant solar panel.

The 2010 North American Solar Challenge is a competition to design, build, and drive solar powered cars in a 2400 mile rally style event from Dallas, Texas to Calgary, Alberta. You can be a part of the CalSol team by sponsoring their efforts. Solar cars, because of their experimental nature, have always been a do it yourself endeavor. For the past thirty years, since the original World Solar Challenge, universities and corporations have been building ever more sophisticated cars. The spirit of DIY projects is what drives this innovation. Prototyping, testing and competition have pushed designs forward and increased speeds while boosting efficiency. Visit our DIY Solar Network to see videos of many different DIY solar cars and join the discussion... 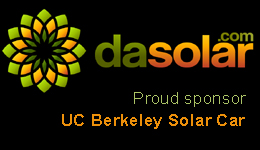